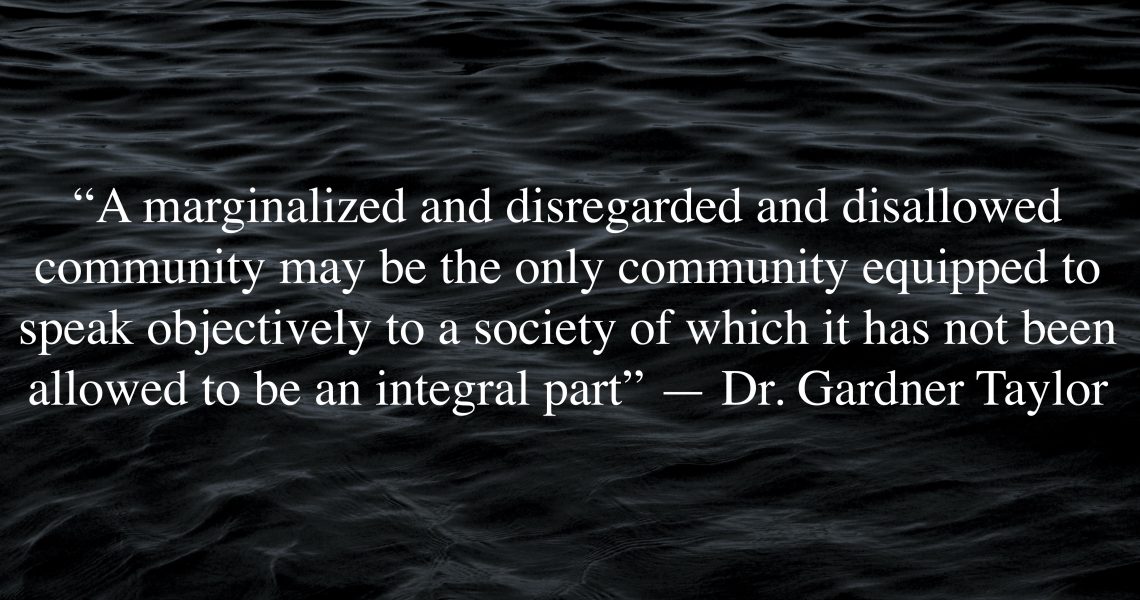 I saw this quote circulating on social media this week in celebration of black history month and I couldn’t help but comment on it. It’s an emotionally powerful quote from an American Baptist preacher that appeals to a sense of empathy and compassion that we should all have towards those who have been mistreated or marginalized in our society.

And yet, while sentiments like this one have become rather popular, I think it is both obviously wrong and morally objectionable.

More specifically, it shows the degree to which genuine Christian virtues are being replaced by ethically questionable secular ideas that are just similar enough to be confused with each other. The quote is a perfect encapsulation of Standpoint theory masquerading as compassion—and another good example of the phenomenon I wrote about last week.

What is Standpoint Theory?

Standpoint Theory is a feminist theoretical approach that emerged from the Marxist idea that people from an oppressed class have unique access to knowledge that is not available to those from a privileged class. James Lindsay and Hellen Pluckrose give a helpful summary in their book Cynical Theories.

“Standpoint theory operates on two assumptions. One is that people occupying the same social positions, that is, identities—race, gender, sex, sexuality, ability status, and so on—will have the same experiences of dominance and oppression and will, assuming they understand their own experience correctly, interpret them in the same ways. From this follows the assumption that these experiences will provide them with a more authoritative and fuller picture. The other is that one’s relative position within a social power dynamic dictates what one can and can not know: thus the privileged are blinded by their privilege and the oppressed possess a kind of double sight, in that they understand both the dominant position and the experience of being oppressed by it.“

The success of the Standpoint theory explains much of what has been happening in our society over the past couple of years. It forms the intellectual scaffolding for the identity politics that have come to define our time.

First, the idea that you can a) neatly categorize society into a hierarchy of power differentials, and b) do so without knowledge of the specific power, privilege, or oppression experienced by any given individual within that group, is an incredibly reductive and simple-minded conception of reality which rejects the primacy of the individual in favor of one’s group identity.

Because the theory is based on this oversimplification that doesn’t match with reality, it’s forced to find a way to compensate (in much the same way that conspiracies are forced to add layers of complexity (absurdity) to their theory as their predictions continually turn out to be false). It does so in an incredibly demeaning way.

Those who belong to a marginalized group but who question the extent of their oppression are said to have a “false consciousness”—meaning that they’ve been brainwashed by the dominant society to not understand the nature of their own oppression. Instead of admitting that not everyone within a specific identity group actually does have the same experiences (which should be obvious), they declare that people who don’t agree with the “correct” group experience are delusional.

By excluding the possibility of someone who has genuine and honest disagreements, they have made the theory unfalsifiable. (And you should be incredibly skeptical of anything that has a built-in mechanism that removes the possibility of it being wrong—it means it can not survive on its own merits.)

Saying that the marginalized and disregarded “may be the only group equipped to speak objectively” sounds good on its face and yet, to be quite frank, is absolutely grotesque (not to mention the obvious point that people from a marginalized group can be just as wrong and confused as the rest of us).

Elevating someone’s opinion to a position sheltered from critique based on the color of their skin or any other immutable characteristic is gross. And the necessary flip side of that—disregarding someone’s opinion based on their immutable characteristics—is equally wrong. If I said that only white people could be trusted to speak accurately on certain issues we’d immediately recognize this as racism. And yet when the same thing is said in reverse using nice-sounding language we quickly embrace it as compassion.

Don’t be fooled. Caring for and bringing justice to those who have been mistreated is a genuine virtue. Giving unadulterated credence to their (political) opinions is not.

I’m open to listening and learning from people who have different views and experiences than I do—people who can show me ways in which I’ve misunderstood or neglected something. But we must do so on epistemically equal ground. Using your identity as a weapon to elevate your own opinion beyond critique while disparaging the opinion of others is both wrong and cowardly. Knowledge is not constrained by one’s status within a social group. We’re all subjective, fallible human beings who have access to objective reality—engage with my argument, show me why I’m wrong, convince me that I’ve misunderstood, and I’ll be happy to change my views. But I refuse to treat one’s opinion as more or less valid based on the color of their skin or their gender or any other characteristic they have no control over. That’s not progress, and it’s certainly not helping.